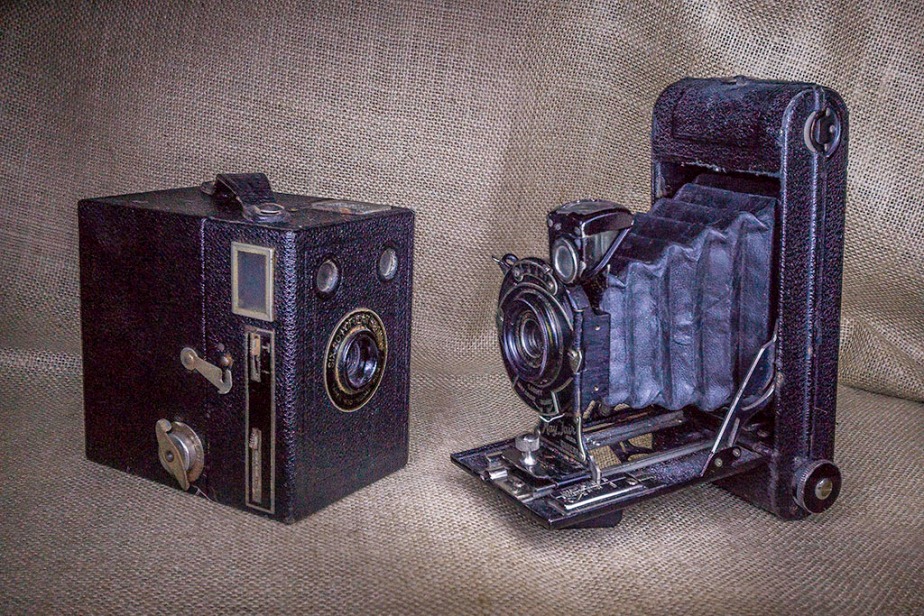 Two vintage cameras that I have inherited at some time or other.

The first is a Kodak Brownie box camera, model SIX-20, which was probably manufactured between 1939 and 1943.

The other is a May Fair folding camera made by The Houghton-Butcher Manufacturing Co. Ltd. probably in about 1932.

Both were popular models and are fairly common. 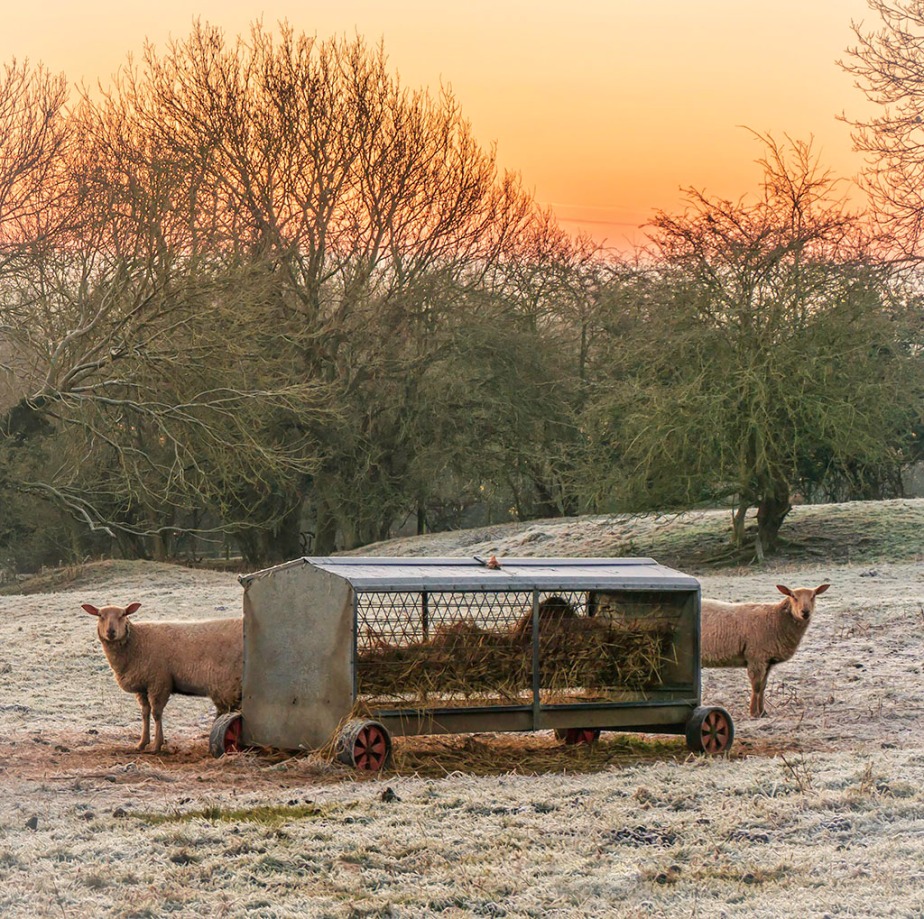 A frosty morning in December as the sun rises over Thurlaston, near Dunchurch, Warwickshire.

Reminded me of the saying; “Red sky in the morning, Shepherd’s warning”. 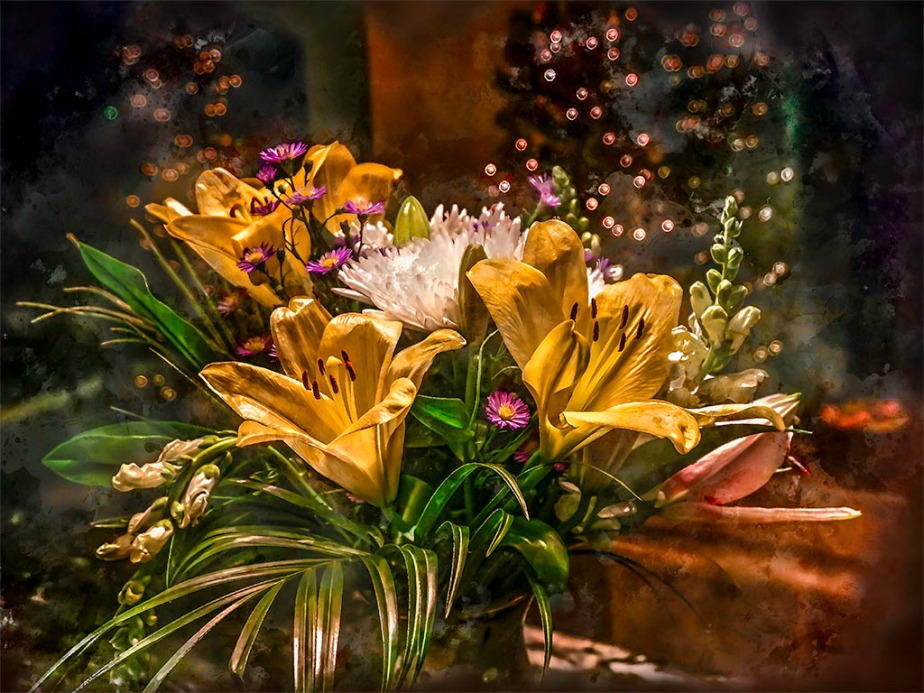 Vase of flowers with Christmas tree in background. 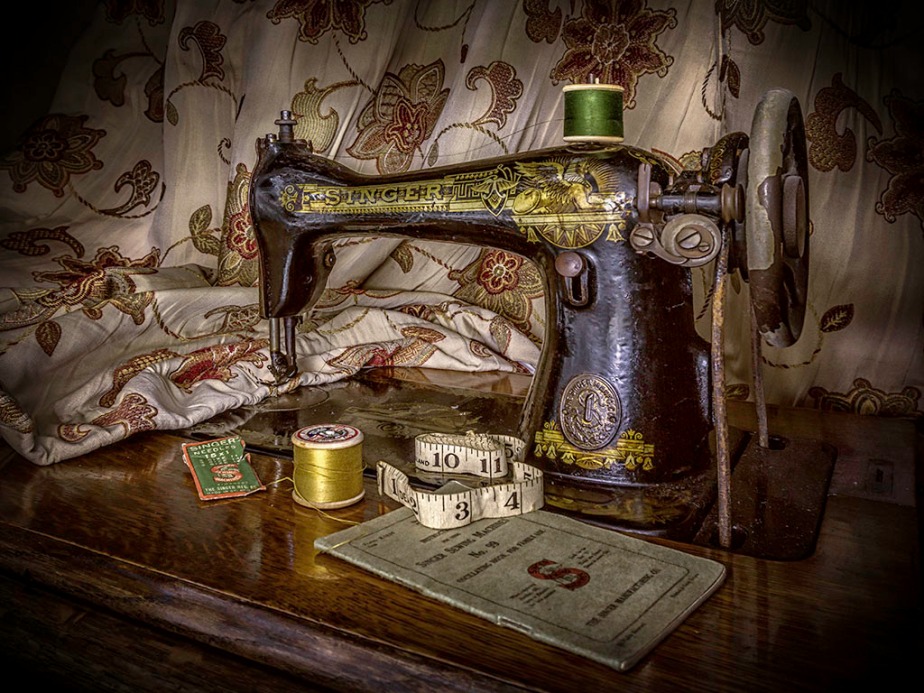 I think this may work better with some sort of diffuser on the torch so will try to rig something up perhaps with tissue paper and a small tube over the end of the torch to prevent leak of backlight towards the camera.

Wind farm at Lilbourne, Northamptonshire in the early morning. 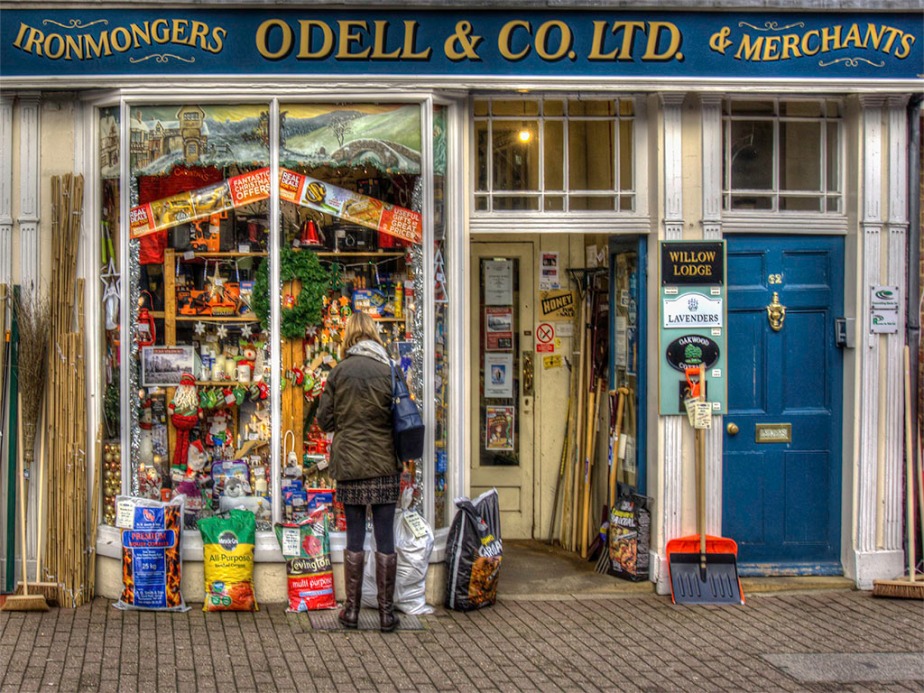 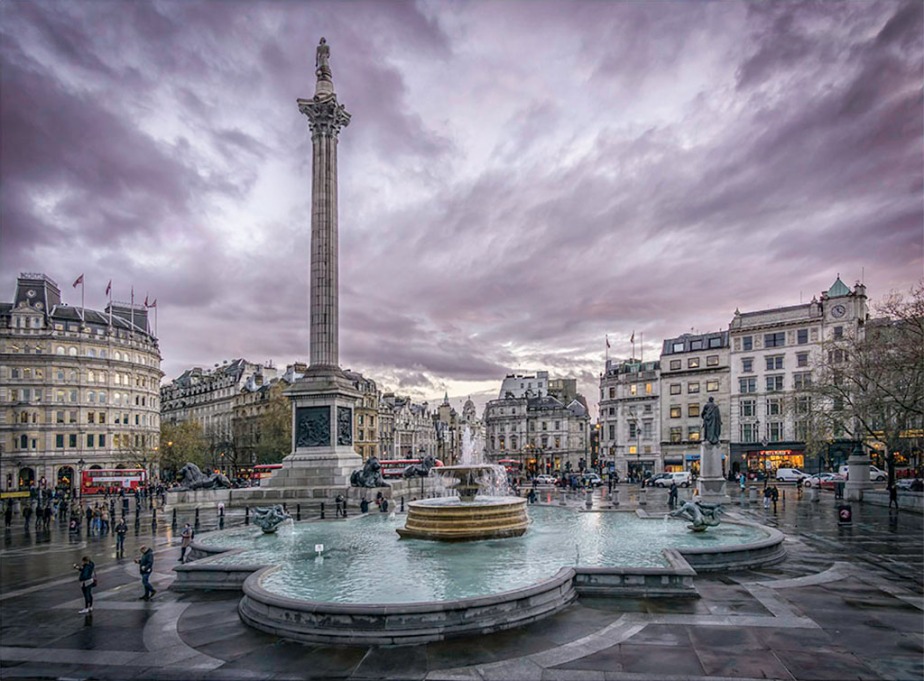 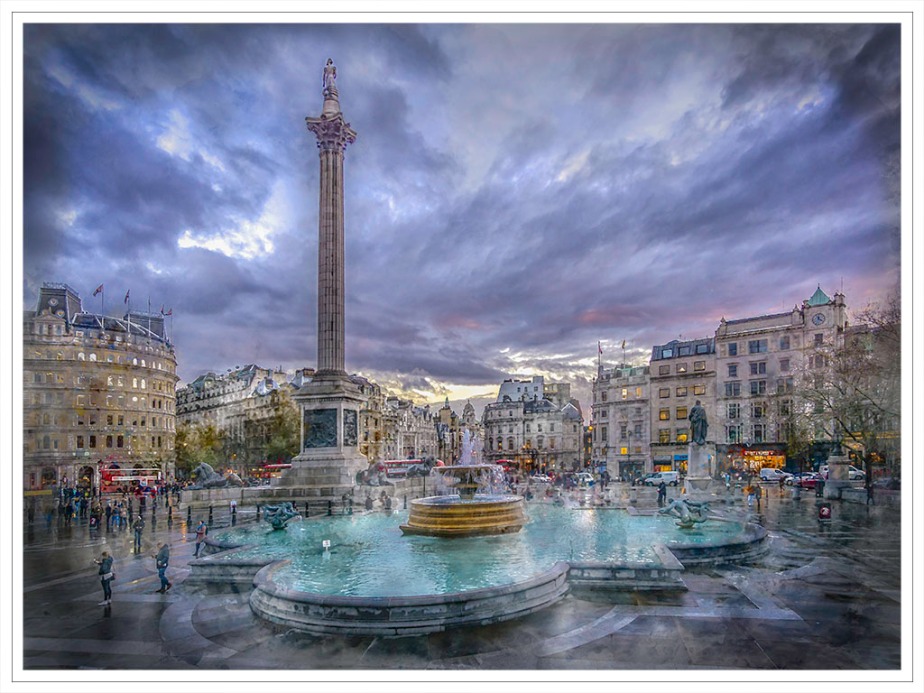 Late afternoon after a rainy day in Trafalgar Square as the sun finally gives up for the day. 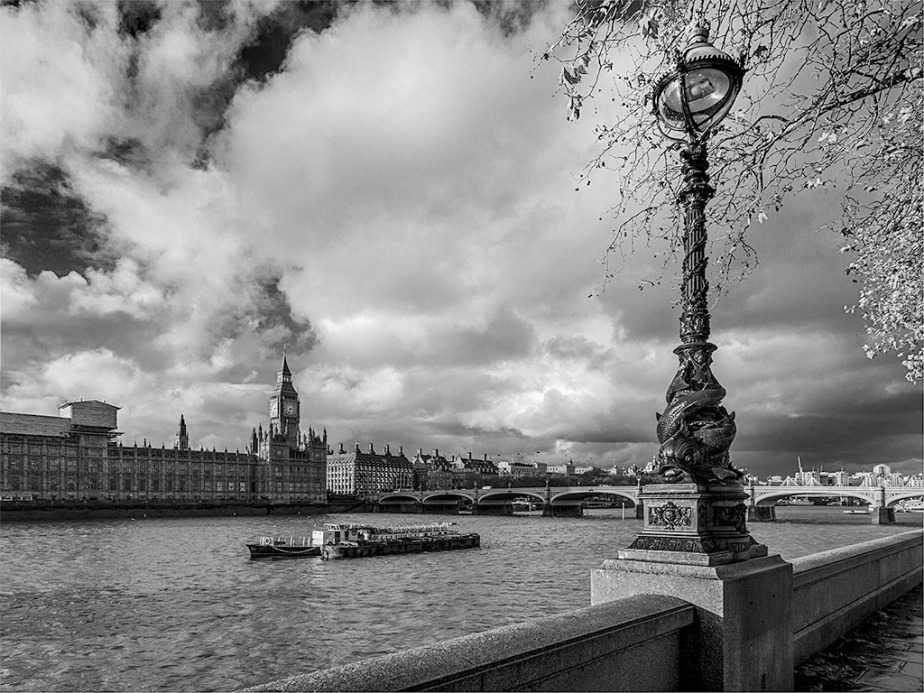 Looking across the Thames towards the Palace of Westminster (Houses of Parliament) and Westminster Bridge. Unfortunately, as can be seen on the left, the buildings were under repair when the photograph was taken. The cloud gap above Big Ben was almost the shape of Great Britain; well, with a bit of imagination!

It was fun to be part of this interesting De Montfort University / Leicester University project using “reflection analysis” and a Virtual Reality reconstruction of the ill-fated Beagle 2 Mars Lander to inform on the reason for mission failure and the present state of Lander deployment.

“Scientists have discovered new clues about the fate of the British-made Beagle 2 Mars lander, thanks to a new research technique. The probe was discovered on the surface of Mars in November 2014 using images from NASA’s Mars Reconnaissance Orbiter (MRO), but questions remained about what had caused its failure to contact Earth. The new findings indicate that Beagle 2 landed on Mars and deployed at least three of its four solar panels.”

“Beagle 2 was part of the European Space Agency’s (ESA) Mars Express mission launched in June 2003. Beagle 2 was successfully ejected from the Mars Express spacecraft on December 19, 2003, but the lander failed to send a scheduled signal that it had successfully landed on the Martian surface on December 25. Although Beagle 2 was detected by MRO’s HiRISE camera in 2014, the exact configuration of the lander on Mars was unknown due to the lander’s small size and the camera’s resolution.”

“Professor Mark Sims, former Beagle 2 Mission Manager and Professor of Astrobiology and Space Instrumentation at the University of Leicester, developed the concept of ‘reflection analysis’ – matching simulated and real images of Beagle 2. The technique is based on simulations of possible configurations of the lander on the Martian surface and comparing the light of Sun reflected by the simulated lander with raw images from the HiRISE camera at a number of different Sun angles.”

“Nick Higgett, leader of the MA Digital Design group at De Montfort University (DMU), along with 3-D specialists Teodora Kuzmanova and Dr. Eric Tatham, used 3-D software to model the scene in three dimensions. The simulation was done by adjusting the position of the Sun as well as the orientation and angle of Beagle 2, and then unfolding the four solar panels at different angles until they found the best match with original NASA images.” 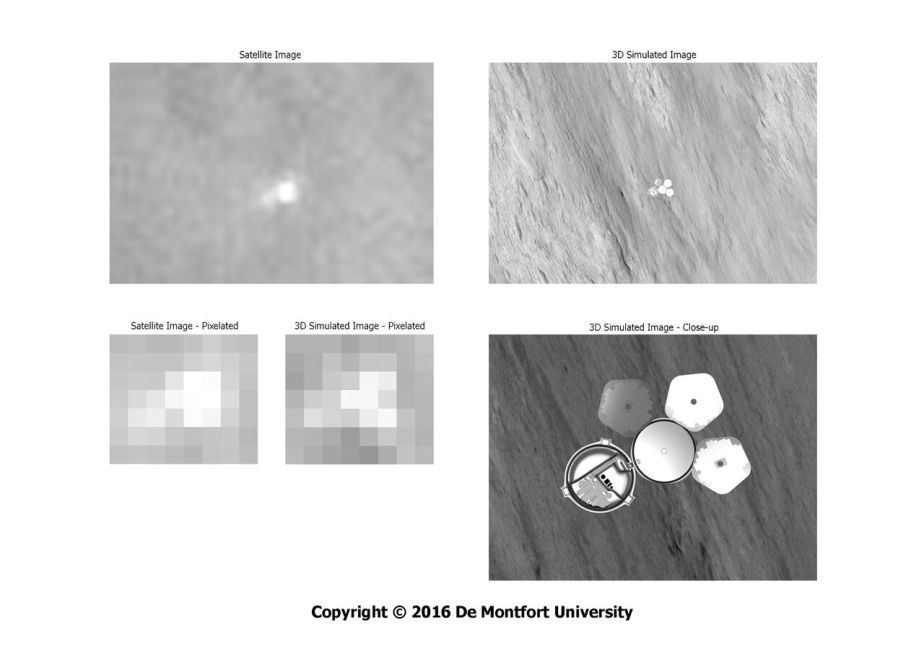 “ ‘This unique University collaboration between space scientists and digital designers allowed the reflection analysis concept to be put into practice and tested and ultimately produce these exciting results,’ said Professor Mark Sims.”